When I finally moved to the country 15 years ago, we built a barn.  Not having anything to put in it, I set about changing that.  During my years as a designer, I sold many English paintings with sheep.  I had come to love anything with sheep in it, paintings, prints, etchings, lamps with porcelain sheep, sweaters with sheep (yes, you know the one, 24 white sheep, one black one, a fashion embarrassment if there ever was one) and sheep “doodads and geegaws”, including sheep soap.  One day, I saw an add for sheep in the paper.  The Golden Goose and I loaded up our small children and took off to claim our sweet, wooly little lamb.  When I got there, there were no lambs to be had, but a field of muddy, hairy, smelly sheep, crying and running from the farmer like he was Satan.  (Turns out he was.) We had driven 92 miles with a daughter who had gotten carsick and thrown up in her brother’s hat.  This caused her brother to cry because it was his favorite hat and he wanted it back, barf or not.  Also, I have to stop a lot to go to the bathroom.  I don’t know what it is about getting into the car with the Goose that makes me have to pee, but he says it is to counteract the skill with which he passes every car and a deep seated need to undermine his dominancy on the road.  Whatever it was, we weren’t leaving without a sheep.

The farmer told me I could “pick me out one” and I chose one that looked exactly like every other sheep in the pasture.  He then told me she would probably not like me for a while and that sheep weren’t all that smart or friendly.  When I asked when and how she should be sheared, he just laughed and said “lady, these ain’t wool sheep, these is EATIN sheep”.  As a vegetarian with veg kids, I almost passed out.  Suddenly, all these sheep in the pasture needed to be saved.  I cried, the kids cried, but the Goose steadfastly refused to buy all 300.  So, we folded our large sheep into a dog crate made for a small dog.  She none too happy about this.  We put her in the back of the Goose’s truck for men who want to seem manly but really want a luxury car inside and she baaaahhed and cried all the way home.  Upon stopping at a Dairy Queen to use the loo, she startled the entire ice cream eating crowd.  After she was unloaded, though, she defied the evil sheep eating farmer by looking at me with love and commencing to follow me everywhere.  She was lovely! That was 12 years ago.  Clementine is still with me and is, by far, the most intelligent animal I’ve ever come across.  This includes labs, all other dogs, small children, and my in-laws.

Many know my problem with animals wanting to come into the house.  I’ve been described as the lady with animals in her house.  This is not true!  As a designer, I must say I have a great house.  It’s clean and normal and really pretty.  Things do get in from time to time though and one night when chaos was happening with my kids, kids’ friends, and adults with  cocktails, Clementine got in.  She doesn’t really look for me but goes straight to the pantry for cookies.  She has a terrible sweet tooth.  The Goose’s way of dealing with her is to herd her by standing behind her and bumping her towards the door, muttering and swearing (both of them).  On this particular evening, the pizza delivery man arrived at our glass door just as the Goose, bent over Clementine, bumping her on the behind to move was trying to exit through our mud room.  The man gaped while the Goose stammered an explanation for why he had a sheep in a scandalous rear chokehold, but the man didn’t want to know.  He just took the cash and left in haste. 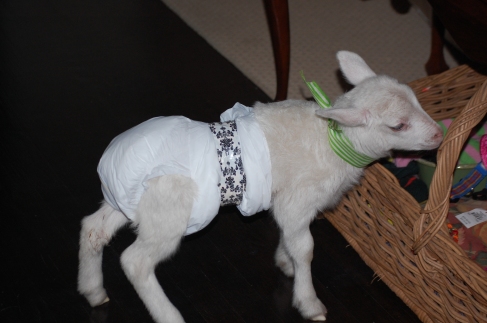 Last Valentine’s Day the Goose was forced to give me real little lamb.  (Forced because we saw one gamboling on the side of the road on the way home from dinner and a man who has FORGOTTEN all the accouterment of Valentine’s Day really can’t argue with a seething wife.)  Clarence is not intelligent.  He is needy.  This is because I allowed him to stay inside (it was cold!) for a few days provided he wear a diaper which I firmly affixed with damask duct tape.  Yes, I know, it’s wrong, but he, like every other animal, is affronted that he cannot come in and lie by the bed.

I don’t really have a zingy wrap up here, only to say that sheep are individuals, just like people.  The fact that people eat lamb, one of the cruelest things I’ve ever heard (what they do to those babies before they hit your plate is unthinkable) makes me sad.  Imagine your yellow lab cut into bits and covered in mint sauce and order a salad next time!