The Goose said the other day that, truly, alcohol was the cause of most of the trouble in the world.  I was shocked that he would say that to me.  I felt personally offended.

I sound like a bigger lush than I am.  I would say I am low to medium in the world of 45 – 55 year old women who love wine.  I feel like wine ranks in the top ten list of things necessary to a good life, but not in the top 5. I think most women my age feel wine is what KEEPS trouble from happening. I’m sure that during those scary mid-winter evenings, when my child announced he had a project due the next day, his father was working late and our printer was out of ink, a small tipple is what kept me from committing a harmful crime upon a child. I have no doubt the Wright Brothers mother, after watching her children take to the skies, turned to her best friend and said, “well, I think I need a little something”.  I feel certain the reason so many marriages stayed together in the 50s is surely because of that golden slice of time, “the cocktail hour”.  How many women would have made it through visits from mother-in-laws without a little help?

That said, it HAS caused problems.

The Goose’s and my favorite thing is the crime blotter from the little paper from the town near our lake house.  Each and every one of these brilliant crimes is alcohol fueled and causes us no end of mirth.

Here is just a sampling of some police blotter incidents, not all from our town:

And my favorite of all time:

5.  A woman on 37th street called 911 and reported that her boyfriend refused to BRING HER A CASSEROLE.

Okay, we’ve all been hungry and number 5 might be understandable.  I once cried because The Goose would not leave work to bring me dumplings when I was pregnant. Clearly, though, each of these perps was out of his mind, most likely on MD 20/20, that low rent standby.

It’s true that alcohol does make some people fight more (not me, I love everyone and by that I mean, everyone) and it has caused countless mad bouts of slurring karaoke at office parties that has made millions call in sick to work to avoid embarrassment the next day. But, on the flip side, it has caused billions and billions of mothers, throughout history, to glance at the clock while toddlers drool on their pants leg, puppies poo on their floor and husbands call to say they’ll be late shudder with glee that 5:00 has come again and they can sit quietly and sip a glass while Mr. Rogers plays softly in the background.

It prompts stories to be retold, year after year because someone does something stupid involving jello or shaving cream.  It allows us to know deep dark secrets because someone belts out their inner desires at a party.  Someone I know, but will not name, once went back into a bar, at closing time, went into the bathroom and fell asleep on the toilet not to awaken until she was found locked in the next morning.   That’s a good story, years later, that wouldn’t have happened if she’d been pounding diet Coke.  She grew up and became, guess what, a fabulous, stylish and respectable attorney.  See?  It all turned out just fine.

Yes, it does give false courage and cause self respecting women to pour dish soap into neighbor’s tacky fountains.  Okay, it pushes some women to call up ex-husbands while their good friends egg them on.  (I’m sorry.)  It whispers to some idiotic ladies, while lingering over a glass at dinner, to tell their children that one of them was conceived in their grandparents’ swimming pool.  Geez. It’s possible The Goose had something there.

Like the saying goes, no good story ever started with “hey y’all, want a salad?”.  I’m not promoting booze, and I’m not talking to folks that truly have a problem.  I’m just musing about it and repeating the conversation I had with The Goose when he uttered his proclamation.  I agree, it’s not for everyone.  It causes beaucoup problems for many, but most of us keep it in its place and in perspective. I’m sharing with those women who call each other up right in the middle of helping with math homework and say “Hey, wanna come over for a quick glass?” and the response is “Oh, thank the Lord in Heaven!”.  Speaking to those of us who have sometimes wrapped a waiter in a snuggly hug when he arrives and announces that he has La Crema by the glass”.

In any tee-totaling argument I always pull out the trump card when I whip out this doozy:  The first miracle was water into…what’s that?  Oh, yeah, wine. 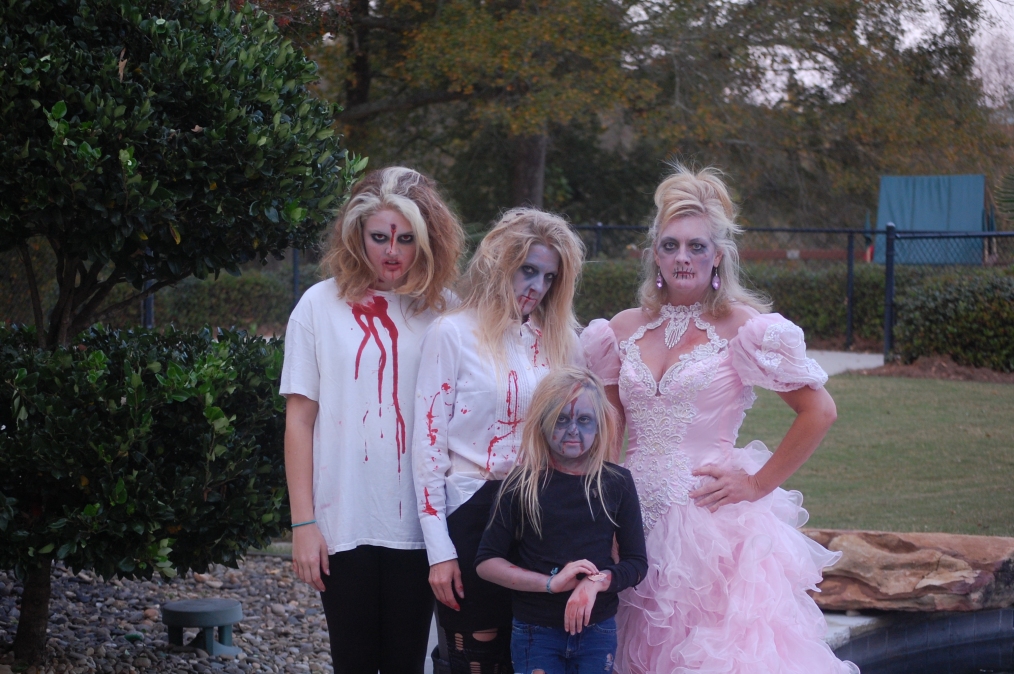 So I’m lying here, enjoying Charlie Brown and the Great Pumpkin and relishing the fact that I’m not out walking little kids around door to door, freezing and trying to balance a flashlight, a two grubby little hands and a wine glass.  Really, I’m just happy about the missing the cold.  It’s a little sad to see that my mommy Halloween packed up it’s candy bag and left years ago.  (This is where I’ll thank you, Cricket, not to bring up the fact that I sometimes let your dad take you and I stayed home to man the door with my friends and cocktails!)

I don’t understand those folks who claim to hate Halloween.  I can’t even begin to address those who believe it’s evil.  I grew up Baptist, my mother was perfect and thought Halloween was just fine and I’m sure she got that information directly from God.  I went to Christian school and I know that NOWHERE does it say “thou shalt not dress as a Power Ranger and collect candy”.

Why, in the world, would anyone not want to put on a costume?  I’ve frequently been known to whip on an old prom dress or glittery majorette costume just for Friday night cocktail hour.  It just makes things more fun.  The other day I had on a gown with a 6 ft. train and walked several times around the kitchen and considered it a good floor cleaning.

The Goose refuses to dress up.  Twice, I’ve had him in a Halloween costume.  When we were first married and he still could be moved by “a look”, I made him a Jolly Green Giant costume by dying a pair of long underwear green and making him a leaf dress to wear over it.  I then covered him with green paint and went with him as Sprout.  We went to a party at his boss’ house.  Just this weekend I was reminiscing with his boss and he had the audacity to bring up the fact that there were parts of his house with traces of green paint, on carpets and walls for years.  I am assuming he was commenting on our exuberant dancing and the Goose’s “nap” on the carpet sometime in the wee hours.  I wish I still had a picture of it.

Several years ago, when he had become immune to “the look”, Cricket asked him to dress up and he did, briefly, wear a pair of fairy wings while downing some beers.  Fifteen minutes, tops. I DO have a picture of this, but am not allowed to post it lest the Goose’s business associates realize he has a fun side and a family.

When the kids were little, we would become so overcome in the costume isle that I couldn’t say no and we would go home with a 2nd mortgage’s worth of costumes that required a change every hour.  As Shep wore his for some part of everyday for two years, I felt I got my money’s worth. The child wore a batman cape and frog boots for two solid years, ever day.  Everywhere.  The costumes, the pumpkin candy holders, the nip in the air, neighbors, wine.  I loved Halloween with little kids. I loved Halloween as a child.  I really liked it as a teenager (except for the two month’s worth of trouble I was in afterwards…sorry, Mom and sorry to my date for all the throw up in his car.  I mean, really, you make a drink that tastes like peppermint schnapps and expect kids to know when to say when? Seems like some kind of conspiracy to me!)

You know what else is great about Halloween?  Parties.  Parties where everyone dresses up, there’s lots of good stuff to eat and drink and, best of all, NO GIFTS!  There is absolutely no stress about what to take and give.  No wrapping, shopping, guessing if what you’ve brought is adequate.  I love that.  You just throw back a shot or two, put on a wig and, voila, good times.  My love, the Trophy Wife and her husband, Big Poppy have a party that beats all others.  In years past I have misbehaved to the extent that my children and husband have chastised me greatly for weeks.  This year, I was SO good that I remember all parts of it and it was fantastic.

Wrapping up, Halloween is good and bad.  On the surface, it’s fun, but  it’s the sneaky little holiday that makes us think the oncoming winter is going to be okay.  By Black Friday, most of us realize we’ve been duped and are already longing for spring.  So it’s a good thing to give this scary night it’s homage.  Now, it’s November, though, and I can’t help but think of the ugly woman with her make-up off on the morning after.  Things just look bleak and scary with just the cold and the talk of the election.  Ugh!  Somebody hand me a fluffy dress, quick!