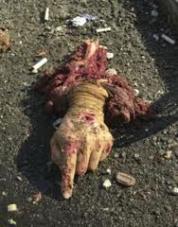 Last night I had a fright.  That, in itself, is nothing unusual.  I am a child of the late 70s.  I grew up on scary stuff.  I had an intimate knowledge of Freddy, Jason and Michael.  I saw every Friday the 13th, every Nightmare on Elm Street and all the Halloweens.  I watched The Shining and Pet Semetary (yes, I know it’s spelled incorrectly, take it up with Mr. King). I went to haunted houses, told scary stories and devoured every book with a black cover I could get my hands on.

What I’m thinking now is it’s a lot like the saying, “a moment on the lips, a lifetime on the hips” except with me it’s “a teen life filled with fright means a life of scary nights”.

About the time I had Cricket I put down the scary books.  I was 28.  That’s a whole lot of severed crawling hands, floating demonic heads and zombies from hell that had time to roost in my brain.  Once I had a baby, I just stopped enjoying dismemberment, don’t ask me why.  All those scary images, though, haunt me nightly.

My kids love scary movies.  They love to be scared.  Their father has spent their entire childhoods springing from a crouched position when they turn a corner.  Even I have recently hidden behind The Boy’s car when he got out and caused him great distress. The poor Boy that couldn’t sit on the toilet for two months as a toddler after his dad scared him senseless during “Scooby Doo on Zombie Island”.  Why the toilet was involved we never really understood.  They know never to depend on me to come to their rescue if frightened.  Once, there was a noise coming from the little troll door in Cricket’s room so vile, so horrifying, that she and The Boy stood up on her bed and screamed and screamed for me. They were terrified to even put their feet on the floor.  When I got up the stairs and down the hall, almost to her room, I heard it as well and yelled that I was unable to come and save them, they would have to jump to the door. There was a lot of back and forth with them begging me to come get them and me yelling “No, something sounds scary!”. It was the worst noise I’ve ever heard. It turned out to be a neighbor’s cat, but my kids have never let me forget that I was too scared to come in and save their lives and they harbor a loathing of tabby cats to this day.

There is one movie, so vile, so horrifying that just seeing the last five minutes of it by accident caused me to lose an entire night’s sleep.  The whole premise bothers me so greatly that I have forbidden the kids to mention the name.  They delight in whipping out the words, “Human Centipede” just to piss me off.  I am sure that in the history books of the future, this movie will coincide with the beginning of the end of good and kind society. Images from this scar my very soul.

Last night I heard an irritating beep repeating itself about once every minute.  So, I arose and went to investigate.  (It was most likely a smoke detector.  Last time we could not find the origin of the noise, The Goose got so angry he ripped “the smoke detector” from the wall.  Lo and behold, it did not fix the problem as it turned out to be the DOORBELL.  Now we still have beeping but our pizza man waits at the door for 20 minutes.)

I was not thinking about anything except the root of the noise when I made the turn to go upstairs.  Although I KNOW I didn’t see a small girl in a white dress, bloody eye sockets and drooling mouth, floating down the stairs, I had a hard time convincing myself of it and I high tailed it back to bed. The distance between the stairs and the bed seemed endless and fraught with my greatest fear, things standing in corners.  Once in the bed, I turned to tell the Goose, but I have absolutely no faith in him during these situations whatsoever.

For years the Goose has delighted in scaring the pants off me.  So many nights, when I’m almost asleep, he’ll whisper, in the deadliest whisper, “Lu, what the hell is that sitting in the chair in the corner”.  Then it’s on.  The lights have to be turned back up, I’ll have to get a glass of water, and get my heartbeat regulated, all to the stoic, self-congratulatory pleasure of The Goose.  When he knows I’m frightened and I say “Buddy” to see if he’s awake, he’ll open his eyes, wide and staring in the moonlight, and say, “I’m not Buddy…”.

He hides behind doors.  Not the novice, he never jumps out and yells “boo”, he just stands there, staring.  Occasionally, he’ll whisper “hiiiiiiii” in a dead man’s voice. 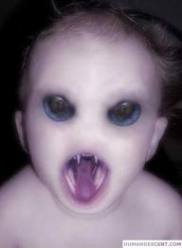 Once, I got up from bed to go to the bathroom and when I got back in, he waited a few minutes and said, “Shit” in a very slight voice.  “What?”, I answered, knowing doom had come. “The light in the attic just went on”.  When I looked, sure enough, I could see the light coming from the crack.  This caused me to try to prod him out of the bed to go accost the intruder, or ghost, or thing lurking in our attic, but The Goose pretended to be terrified, which only fueled me further.  He then ducked quickly under the covers, which caused me to duck under with him and he whispered “Oh nooooo” he moaned, “I just saw a little girl just standing in the corner!”.  He then gets really crazy eyed and I realize that I am trapped in a dark room with a staring child, a possessed man and something, something that can turn on the lights in the attic.  He still revels in the panic he caused in me that night and strives hard to duplicate it.  Although he hasn’t come close, he is always thinking, always plotting.  I know he’s always planning in his devious mind and thus, I might be forgiven for being a little on edge.

I don’t know why I stay with a man who will plan to scare me to death while I’m in the bathroom, but I do know my vengeance will be slow and painful.  And I know that vacationing on a man’s life insurance money, with 42 pairs of great new shoes and a 26 year old waiter who doesn’t watch scary movies is the best revenge.