This summer I lived in a frat house.  It sounds like more fun than it actually was.

My son  goes through life in a giant traveling circus of chaos.  Early on, I made the decision to be “the house” where kids hung out.  My house was “the house” when I was growing up and I always enjoyed it.  The thing I didn’t take into consideration was that I was a girl.  I was an only child.  Also, my parents just, well, cared more?

I have given up, somewhat, it’s true.  This is strictly because of my selfishness and because multiple children just wear one down.  People used to tell my mother that having an only child just didn’t really count and it would make her furious.  I have news, it’s just too easy, especially if your child is a girl, and those of you with singles really should be more put together and help out the rest of us by vacuuming for us or bringing us meals.

I have several friends with six, yes, six kids.  My son Shep’s best friend is one of six.  This allowed him to spend over 75 nights with us during the summer without his mother knowing he was gone.

Shep is a social creature. His circus consists daily of a band of about 6 boys, over 20 pairs of their shoes, all over size 12, that take up the space of a Buick in my mudroom, a wardrobe of preppy clothes that would make a Kennedy jealous (all needing dry cleaning), an ever changing cast of “hot girls” and about 41 gallons of milk.  You know how, in those old Bible movies, a swarm of locust would arrive and decimate a town in about seven minutes?  Uh huh.  That.

Boys are hungry.  My oldest, a girl, lives on air and french fries.  The Goose and I eat out mostly but we are left with the problem of the boys.  They are ravenous.  They want to eat every single day.  Creating a meal would be a mystery that I have no wish to solve.  I don’t know how other moms do it, but I am living for the day that some smart girl with kitchen skills finds Shep and begins cooking for him.  Maybe he can bring something home for us?

The fantasy I had of just hanging out at the lake all summer with the boys, like something out of a Hardy Boy’s book, just didn’t pan out exactly that way.  I pictured snapshot moments of bonding and wholesome marshmallow roasting. It went more like an 80s rock video.

This summer I chaperoned, chauffeured, pulled kids on wake boards, ordered pizza, washed clothes, washed towels, washed towels, washed towels (did I mention that I washed towels?) and then did it all over again the next day.  The boys had a rotating wheel of girls so beautiful and, um, well, mature looking, that I felt like Mrs. Doubtfire in their proximity. Since Shep will start driving on his own next week, this was probably the last summer I’ll be needed as an integral house mother at the frat house.  He won’t need me for the hour and a half transport.  I won’t be driving when they forget I’m in the car and blurt out everything going through their boy minds.  Since I now know what’s in their minds, I feel this is a good thing for all of us.  As for me, I am trying to forget the lyrics to every rap song ever played.

I hope, though, when the boys look back through the lens of time, they’ll remember this summer as the best one ever.  I hope it’s the jewel at the end of their childhood and I certainly hope they forget the language I used when asking them, over and over, to please clean up their $^!(! 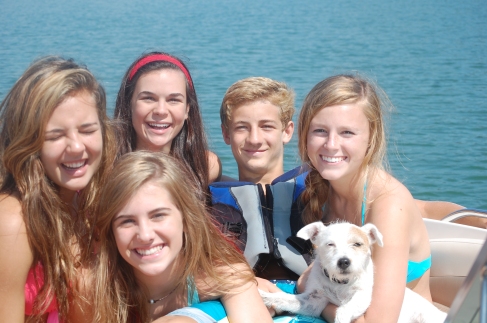